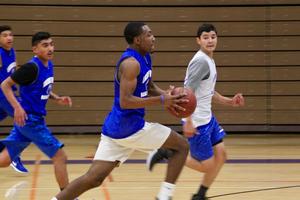 Hoops star Donovan Moncrief plays final game as a Mustang, scoring 22 points.
From Coach Barkley
Yesterday was the last day of the regular season for the winter sports. Here's a quick recap of how the day went for Lucerne Valley High School sports teams:
The girls soccer took on Cobalt at Lucerne Valley and played tough to finish out their season but eventually lost the game 11-0. The Lady Mustangs soccer team finished with a record of 1-16-1 and recorded the first-ever win in school history.

The Mustang boys soccer finished the season on the road taking on Cobalt. The team hung with the Cougars for most of the game but lost 6-0.  Lucerne Valley boys soccer finished 5-13-2 on the year.
The Lucerne Valley boys basketball team played one of their best games, staying even with Victor Valley Christian most the game until the last minute and lost 54-48.  Donovan Moncrief finished his last game in a Mustangs uniform with 22 points and junior standout Isaiah Hernandez added 13 points.  The boys finished the 2018-19 season with a record of 10-18, hitting the double digit win total for the first time in seven years.
Girls basketball had a tough night on the road. Although the Mustangs led a majority of the game, the Lady Mustangs couldn't hold on in the end and eventually fell to the Royals, 36-31. Krystian Otwell led the way with 11 points for Lucerne Valley.  The girls finished the season with a 14-12 record and second place in the Agape League, which means they will be heading to playoffs next week.
Earlier, on Wednesday, the Mustang girls and boys basketball teams took on the Eagles of Summit Leadership Academy. The Lady Mustangs started the night off with some great action of basketball. Krystian Otwell led the Mustangs with 14 points, and Ruby Thompson helped by scoring 13. The Lady Mustangs took their 14th win of the season with a win over Summit 40-4.
The boys basketball team played hard and many players saw a good amount of minutes. Unfortunately the team ending up taking the loss, 56-40.  Sophomore Omar Orozco led the Mustangs with 12 points and freshman Robert Cook helped out by draining three 3-pointers off the bench for his 9 points!
Earlier this week, all three Lucerne Valley wrestlers qualified for C.I.F. by taking either first or second in their respective matches at the Cross Valley League Wrestling Championships, held Tuesday in Lucerne Valley’s Sgt. Brian L. Walker Gymnasium.
Junior Isaiah Hernandez and Senior Jesse Perez wrestled in some tough matches and eventually took 2nd place in their respective weight classes. Thomas Salbino had a great day as he eventually pinned his opponent in the third round to take first place in the 182-pound weight class. The CIF Individual Wrestling Southern Division Championship is Feb. 8 and 9 at Brea Olinda High School in Brea.
Spring Sports for both the Lucerne Valley High School and Middle School will be gearing up shortly. High school spring sports are baseball and softball, track & field and golf. On the middle school side, both boys and girls basketball teams are currently forming.
Coach Brandon Barkley is Lucerne Valley Middle High School’s athletic director.
-------------------
PHOTO: Senior basketball star Donovan Moncrief, shown during a preseason workout, played his final basketball game as a Mustang last night as the regular season for winter sports wraps up.
Published February 1, 2019 Print