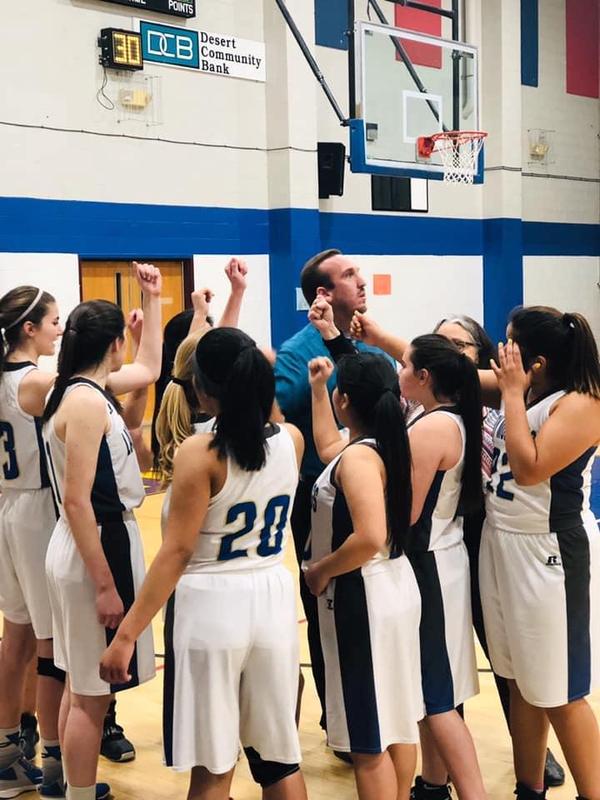 Lucerne Valley High teams get three wins, one tie on Senior Night.
What an amazing day (and night) of sports for Lucerne Valley High School last Friday.
It all started with the Lady Mustangs soccer team taking on Summit Leadership Academy and playing a tough game, eventually playing to a  1-1 tie. This was followed by the boys soccer team also taking on Summit Leadership and pulling out the victory 5-2.  Andres Velasquez led the Mustangs with a “hat trick,” scoring three times. Teammates Saul Macias and Michael Salbino also scored for the Mustangs.
In the gym, the Lucerne Valley girls basketball team took on Sage Oak and looked to be in playoff form as they won easily, 58-16. Point guard Ruby Thompson led the Mustangs with 16 points, Raelean Camona scored 13 and Brenda Almonte added 10.  The Lady Mustangs are now 13-11 with two more games to go.
The night cap had our Boys Basketball team in one of the best — and thoroughly dramatic — games of the season.  The game was back and forth all night long. Omar Orozco literally saved the game by scoring a layup at the buzzer to send the game into overtime.  The boys eventually won the game, 46-44, in overtime. Donovan Moncrief, who was recently named the boy’s “Athlete of the Month,” led the Mustangs with 21 points.
Today (Monday, January 28) the Boys and Girls Soccer team will be heading to Lancaster to take on Desert Christian at 3:15 p.m.
— Brandon Barkley, Mustang Athletic Director
——————————
Photos courtesy of Assistant Principal Kelly Boeing
Published January 28, 2019 Print