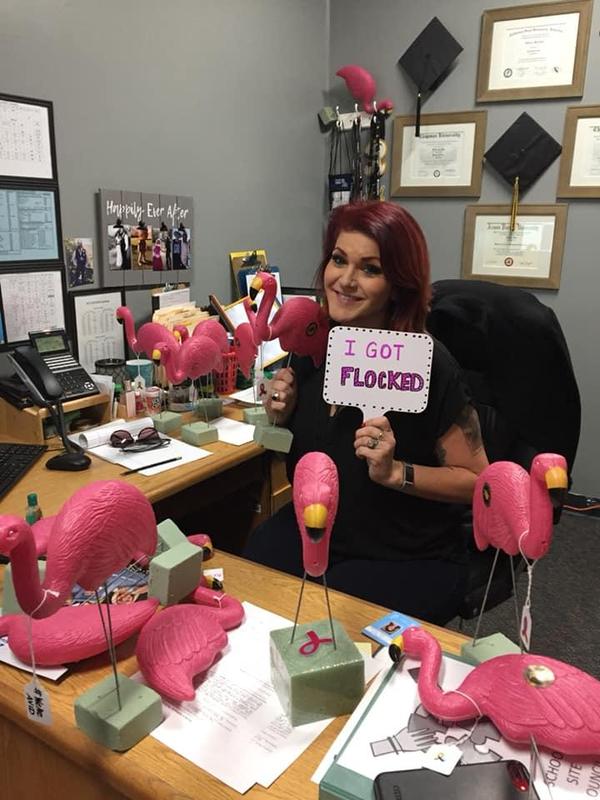 AVID students participate in community service activity while helping to raise money for cancer research.
This month, when they least expect it, Lucerne Valley school staff members are getting “flocked.” But in this case, it’s all for a good cause.
Lucerne Valley Middle School history teacher Naomi “Ms. O” Oyadomari, who serves as an advisor for the school’s AVID program, got the idea from an AVID class at Hesperia High School. The class did a similar “Pink Flamingo Flocking” activity for their club. Placing plastic pink flamingos has been used as a fundraising activity for various causes, and in recent years “flocking” has become a popular way to raise money for breast cancer awareness. Pink is the official color for breast cancer awareness; October is National Breast Cancer Awareness month.
“I thought our school would take it to another level and incorporate it as a community service project fundraiser,” Ms. O said. “As part of our AVID certification, our students are encouraged to participate in service learning  and community service activities.”
Bringing awareness to breast cancer and early prevention not only is a community service, but it’s a personal mission for Ms. O.
“I am a breast cancer survivor myself,” she said. “I was diagnosed in 2011. I was lucky because I caught it early. Our campaign hopefully will bring awareness and raise some money for the High Desert American Cancer Society. It is to bring awareness and to add a little fun to our FUNraiser.”
Here’s how the Lucerne Valley schools fundraiser works: The Lucerne Valley Middle High School AVID “flamingo technicians” secretly go into classrooms or offices and place pink flamingos.
The first person to get “flocked” at Lucerne Valley Middle High School was Principal Mr. Nate Lambdin. He paid $5 to get his office unflocked and then chose to re-flock another staff member for an additional $5. The good-natured principal chose Mr. Barkley to reflock, who then chose teacher Mr. John Wortham. Eventually pink flamingos hit all corners of the campus. The pink flock then migrated to Lucerne Valley Elementary School where it flocked Principal Mr. Burt Umstead, who also serves as the Lucerne Valley Unified School District’s assistant superintendent and three elementary school teachers.
“At this point 15 staff members have been flocked,” Ms. O said.
The “Pink Flamingo Flocking” campaign has raised more than $150. Before it ends, the flock may fly southward toward another LVUSD facility….
“It's just been a fun way to bring awareness and build a sense of community and service with our staff and students.”
Photo: Assistant Principal Kelly Boeing holds a "I Got Flocked" sign after finding her office covered with pink flamingos. Photo courtesy Ms. Oyadomari
Published October 19, 2018 Print