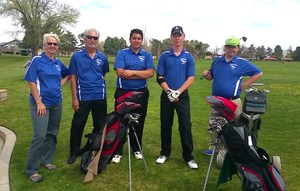 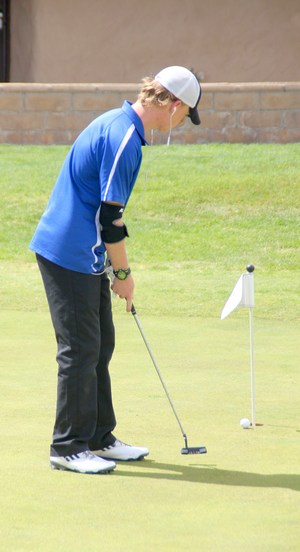 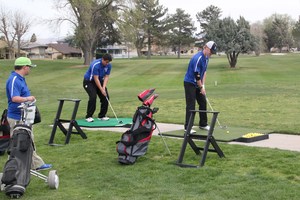 Mustang golf coaches Chris Pennington and Steve Boggio are coaching a trio consisting of Garrett Hoskin, Jesus Arreola, and Audie Mikalauskis.
Everyday Lucerne Valley Middle High School students arrive to campus, they see the remnants of Rancho Lucerne, a planned development that was to feature a 27-hole professional quality golf course. Although those dreams were dashed, a small group of golfers are keeping a local interest in golf alive.
Coached by elementary school teacher Chris Pennington and her husband Steve Boggio, a LVHS threesome is hitting the links and competing every week in the Cross Valley League. The group is led by by senior Garrett Hoskin, junior Jesus Arreola, and sophomore Audie Mikalauskis.
The only player with previous experience is Garrett, who for the past several years has played golf with his father. The 6’1” athlete also is a tight end and defensive lineman on the Mustang football team. Meanwhile Jesus, who is an offensive and defensive lineman on the varsity football team, had never swung a golf club prior to this season. Both can hit the golf ball a country mile, surpassing the 200-yard marker during driving-range practice swings before a recent CVL match at the Spring Valley Lake Country Club. FFA member Audie, who previously helped maintain the statistics, favors his 8-iron on the driving range.
Coach Chris is a lifelong athlete, playing baseball and softball. She also is an LVES adviser for one of the school’s Future City teams, which compete against mostly older, middle school students in the creation of a model city of the future.
“We teach the golfers where their feet are, hands are and follow through,” she said. “There’s so much to learn.”
She and Steve regularly play golf in Big Bear. Steve also plays drums in a jazz trio on the mountain.
While there are many CVL teams with more experienced players — some have grown up with a golf club in their hands — the coaches like what they are seeing in their players. Garrett is showing the skill they expected to see, but Jesus has caught the golf bug — and it’s showing.
“They went from the high 70s (high schoolers play nine-hole rounds) to the high 50s,” Coach Chris said. “And Jesus is like a duck to water.”
Audie is enjoying the sport and improving his golf swing along the way.
The Lucerne Valley team won’t top the league standings this year, but they are laying the groundwork for future players to build on.
Big Bear High is pursuing another Cross Valley League title (they won their first title last spring). Besides Big Bear and Lucerne Valley, the league has the Academy for Academic Excellence, Academy of Career & Exploration, Excelsior Charter, Hesperia Christian, Riverside Prep and University Prep.
The Lucerne Valley High golf team plays Big Bear at 3 p.m. on Tuesday, April 17 at the Hesperia Country Club, then goes against Excelsior at Ashwood on Thursday, April 19. Day 1 of the CVL finals are on Wednesday, April 25 at the Apple Valley Country Club and Day 2 is the following day at the club.
Published April 17, 2018 Print