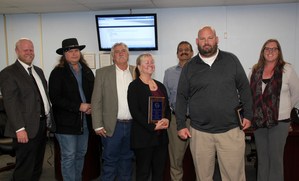 Longtime teacher Vici Miller applauded JoAnne McGinnis's hard work; Patrick Lord recognized as outstanding coach, educator.
Supt. Peter Livingston handed out Employee of the Month awards to coach Patrick Lord and administrative assistant JoAnne McGinnis during Thursday’s March regular meeting of the Lucerne Valley Unified School District’s Board of Trustees.
The superintendent quoted Lucerne Valley Middle High School Principal Douglas Ferber’s recommendation of Coach Lord, who received the Certificated Employee of the Month award.
“Coach Patrick Lord has quickly proven himself as both a role model for the boys and has become a great addition to the Specialized Academic Instruction (SAI) program here on campus,” Mr. Ferber had written. “Coach Lord comes from a family of coaches and administrators. His wife is an assistant principal in Apple Valley and his brother an established line coach at the University of Redlands…. I knew we made a great choice when shortly after summer football began last year, I heard from one parent after another sing Coach Lord's praises.”
Coach Lord represents integrity, family, hard work and dedication both in the classroom and on the field, Supt. Livingston added. “It has been both a privilege and an honor to work with Coach Lord in this school year.”
JoAnne McGinnis was named the Classified Employee of the Month. Supt. Livingston described her as a dedicated employee who has worked for the district for 18 years. She worked at the elementary school, as a records clerk, for 11 years and was promoted to administrative assistant at Student Educational Services where she has worked for 7 years.
Her duties are many and include scheduling and notifying parents of IEPs, keeping track of the district’s compliance dates with the state, maintaining the state data system for special education students, serving as liaison with the SELPA and Children’s Center, SARB Coordinator, and CAASPP Coordinator.
The superintendent said Joanne is the smiling face or pleasant voice many upset parents encounter, when they are unhappy. Joanne’s professionalism and caring nature lets them know they are heard and cared about. She is a master problem solver. Joanne willingly gives of her time to go above and beyond her daily work hours when needed. Vici Miller thinks the hardest part of JoAnne's job is trying to keep track of Mrs. Miller, a task she performs amazingly well.
Published March 9, 2018 Print