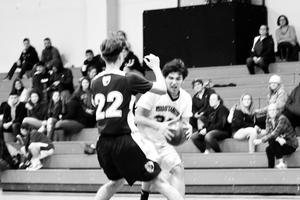 GIRLS SOCCER: Friday saw a full slate of home games at Lucerne Valley, starting with the Girls Soccer team hosting the Trojans of Silver Valley.  Playing short handed our girls played tough but would drop the game 0-6.  Our girls are now 2-4-1 on the season and 1-1-1 in league.  Our Lady Mustangs Soccer will be off until Jan 8th when the play Excelsior at 3 pm. On Wednesday, our last day of school, our high school soccer teams were in action as our Girls hosted Summit Leadership Academy and played a tough 0-0 tie.  The girls had some chances to score but just missed on a few shots.  They played great defense the entire game.
The previous Friday, December 13, saw our Girls High School soccer teams head over to ACE to take on the Eagles in a tough league match up. The girls started off the action and would run into a tough defense from the Eagles.  The would play hard but did drop the game 8-1 and fell to 2-3 overall and 1 and 1 in league.
BOYS SOCCER: Our High Boys Soccer team headed up to Big Bear to take on the Bears on Tuesday, December 17 in an exciting matchup.  Down 1-0 at half time our boys rallied, scoring twice in the final 15 mins to take the game 2-1 and beating Big Bear in soccer for the first time in school history!  Omar Orozco and Emmanuel Velador each scored a goal for the Mustangs who are now 4-3 on the year.
On Wednesday, December 18, with our boys coming off their first ever win against Big Bear hosted AAE in a non-league match.  After a slow start our boys picked it up in the 2nd half scoring 3 times to take the game 4-1 over the Knights.  Senior Emmanuel Velador scored twice and Senior Andres Velasquez and Junior Omar Orozco each scored once.
The Boys soccer also hosted Silver Valley and played a tough game on Friday, December 20.  Seniors Kevin Alvarez and Emmanuel Velador each scored a goal along with junior Omar Orozco, but it wasn't enough as our Mustangs would play to a tie 3-3.  Our Boys are now 5-3-1 on the year and 0-2-1 in league.  Next up for the Mustangs is a tournament game at Loma Linda Academy with AAE on Dec 30th at 11:30 am.
Earlier on Friday, December 13, the boys soccer took on the #1 team in the Agape League and ACE showed why, scoring goals first and never looking back, eventually taking the game from our Mustangs 5-1.  Omar Orozco scored the lone goal for the Mustangs who fall to 3-3 overall and 0-2 in league.
GIRLS BASKETBALL: Our Lady Mustangs Basketball team played their first game in over 9 days as they hosted the Royals from Victor Valley Christian on Friday, December 20.  The Mustangs jumped out to a big lead after the 1st quarter of play up 18-6.  They would slow down  a bit would would eventually take the game 38-24 from the Royals winning a crucial league game.  Senior Brenda Almonte led the Mustangs with 10 points on a well rounded game seeing 7 of the 8 players score.  The Lady Mustangs are now 5-4 on the year and 1-1 in league. The Lady Mustangs are scheduled for a tournament match-up with Bloomington Christian on Saturday, December 28 at 8:30 pm.
BOYS BASKETBALL: The Friday-night cap (December 20) saw a three-point shoot out between our Mustangs and the Royals from Victor Valley Christian.  With 3 pointers falling from almost half court last night from both teams, the Mustangs were out shot by the Royals and would drop the game 66-50.  Junior Omar Soto led the Mustangs with 17 points and juniors Adrian Gonzalez and Tommy Orozco each added 15 points.  Our Mustangs are now 1-8 on the year and 0-2 in league.  Next up for the Mustangs they too will play in the Loma Linda tournament as they play Rim of the World on Friday Dec 27th at 11 am.
MIDDLE SCHOOL BASEBALL: On Tuesday, December 17 the Middle School Baseball team played host to Apple Valley Christian.  Our Colts played hard and new 7th grader Ethan Wagner was a difference maker picking up 3 hits and pitching the entire game which would end in an 8-8 tie.  Our Colts are now 2-5-1 on the year.  Great job Colts!
— Coach Barkley
Published December 21, 2019 Print