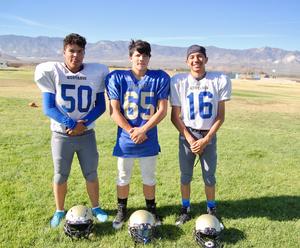 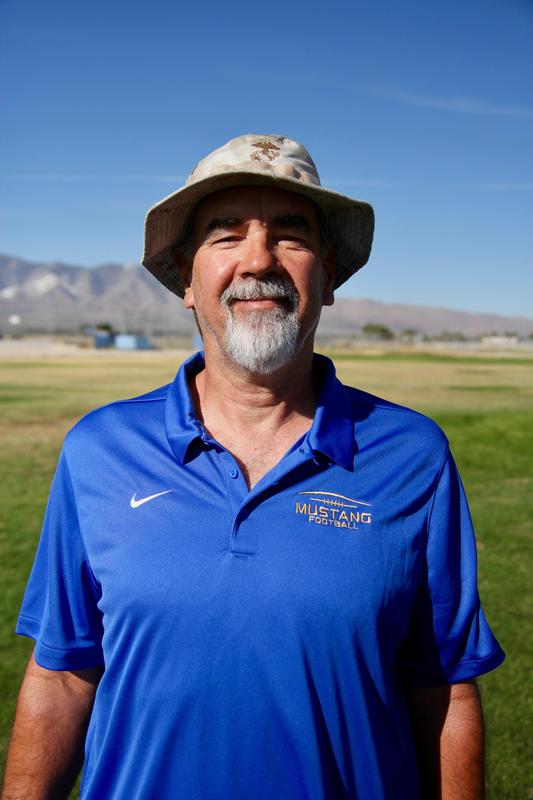 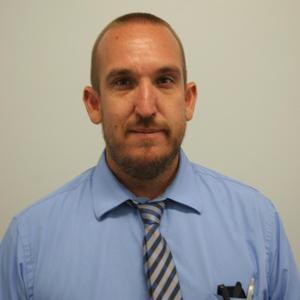 Volleyball season gets underway this week; varsity football’s first game is against Noli Indian at Lucerne Valley on August 30 at 6 p.m.
By Brandon Barkley
Athletic Director
I am beyond excited for this year! We are starting the season with full rosters. Middle school, junior varsity, and varsity teams are shaping up to be very competitive.
On the varsity level, we only have three seniors returning to the girls’ varsity volleyball team, which means that we can continue to grow. I am confident that Ruby Thompson and Leslie Soto will lead the Lady Mustangs to many wins this season.
The junior varsity volleyball team has a new coach, our CTE food service and hospitality teacher Kimberly Evans. She has an extremely talented team that will be led by Cadence Russ and Lizbeth Avelar. Every girl is showing love and excitement for the game with dedication and passion. I am so blessed to be a part of this program and thankful for the support from athletics and administration from Kelli Papiernik, who is in her second year as the volleyball head coach and third year with the program.
As for football, our youth and energy bring a refreshing outlook to the season. With only four returners from last year’s team, our Mustangs look to start anew with our extremely athletic junior class. Juniors Omar Soto, Omar Orozco, and Brian Miller — all playing for the first time — team up with returner Thomas Salbino who led the team last year in receiving yards. All have looked quite impressive in practices on the offensive side. Add in all-league defensive player from last year, senior Michael Salbino, who led the team in total tackles last year along side hitting senior JT Mills — who was injured most of the year — have the Mustangs appearing to be set up as a well-rounded on both offense and defense.
The Mustangs are led by new Head Coach Bob Kerns and Assistant Coach Dylan Miller. The Lucerne Valley Mustangs will play Noli Indian at home at 6 p.m. on August 30.

Our cross-country team may be small but they look to improve on their personal bests from last year as the team is led by junior Noemy Magdaleno and sophomore Robert Cook. Both athletes have been working hard to prepare themselves for out first Cross-Valley League event on September 10.
On the Middle School side, Head Coach and LVHS Class of 2018 Alumni Sarah Smith looks to improve on her 4-6 record and 4th place in league last year as the Colts will bring back five returners and a handful of 7th graders looking to start their volleyball career on the right foot. Eighth-graders Kayden Davis, Marisol Torres and Serenity Petroff look to led the Colts to their first playoff appearance in only the 2nd year. Zoey Davis (sister of Kayden Davis) appears to have the desire and height to help lead the 7th grade class.
Middle School Flag Football has a new head coach in JuanMiguel Angeles, also a LVHS Alum from the class of 2017. JuanMiguel looks to help build for the future as he will bring his knowledge of the game to the middle school level. JuanMiguel played all four years as a student of LVHS. Returning 8th graders Evan Herriman, Riley Rodriguez and Ryker Simmons look to be the leaders of a young team.
———————
The 2019-20 sports season got underway on Tuesday when the varsity and junior varsity volleyball teams traveled to Big Bear High School for their first game. The varsity team then takes on Trona at home on Thursday, while the JV team plays CIMS on Friday. Come out and support our Mustangs as they kick off the sports school year!
PHOTOS:
Top: From left, Jesus Alcazar, Michael Salbino, and Kevin Alvarez are among the athletes ready to become difference-makers on the Mustang football team.
Middle: Head Coach Bob Kerns
Bottom: Lucerne Valley Middle High School Athletic Director Brandon Barkley
Published August 20, 2019 Print