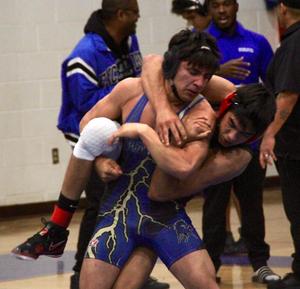 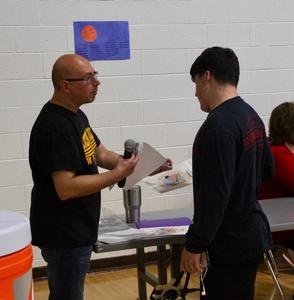 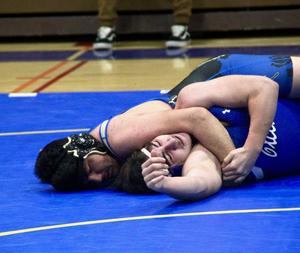 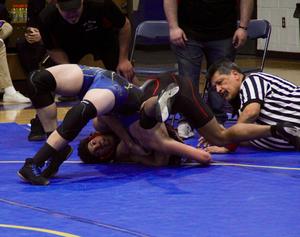 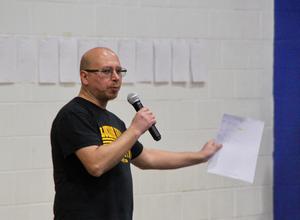 Thomas Salbino wins his match and is named a Cross Valley League Champ.
From Coach Barkley
Yesterday was an exciting day in the gym as Lucerne Valley High School hosted the Cross Valley League Wrestling Finals. Fans were able to watch some great wrestling matches, not only with our athletes from Lucerne Valley but among the other four schools in our league.
All three Mustang wrestlers qualified for CIF next weekend. Junior Isaiah Hernandez and Senior Jesse Perez wrestled in some tough matches and eventually took 2nd place in their respective weight classes. Thomas Salbino had a great day as he eventually pinned his opponent in the 3rd round to take first place in the 182-pound weight class.  Congratulations to the Lucerne Valley wrestlers as they will all head down to Brea next week to compete in CIF! (The CIF Individual Wrestling Southern Division Championship is Feb. 8 and 9 at Brea Olinda High School in Brea.)
Soccer was on the road taking on Riverside Prep, which is undefeated in league play.  Our boys played tough but did fall to the Silver Knights 11-0. Girls soccer hosted the Silver Knight of Riverside Prep. The Lady Mustangs showed improvement but eventually fell 10-0.
Today (Wednesday) the Boys and Girls Basketball will be hosting the Eagles of Summit Leadership Academy for our last home games of the year.  Come out and support both boys and girls today, starting at 4:30 p.m. with the girls followed by the Boys at 6:00 p.m.
Just a reminder, tomorrow is the last day for the regular season for our winter sports.  Don't forget to try and make a basketball or soccer game tomorrow!
Middle school student interested in Co-Ed soccer, there is an important information meeting today in Coach Barkley's room B-102 at lunch.  Boys and girls interested in playing soccer this spring must attend this meeting.
Coach Brandon Barkley is Lucerne Valley Middle High School’s athletic director.
-----------
PHOTOS BY PETER DAY
#1: Jesse Perez, who has earned a birth at the upcoming C.I.F. event, wrestles during Tuesday's league finals.
#2: Head coach Rene Jaime, who served as event emcee, presents the League Champ award in the 182-pound weight class to Thomas Salbino.
#3: Thomas Salbino pinned his opponent in a thrilling match.
#4: Another C.I.F.-bound athlete, Isaiah Hernandez, is all tangled up during a heated championship match.
#5: Coach Jaime makes an announcement during Tuesday's League meet.
Published January 30, 2019 Print