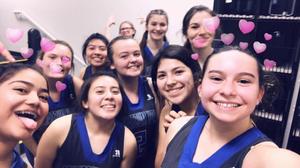 Both boys and girls teams are scheduled to compete in tournament December 26-28.
The day after Christmas the Mustang boys and girls basketball teams are scheduled to compete in the Loma Linda Academy Tournament.
On Wednesday, December 26 at 1:30 p.m., the girls will face Glendale Adventist. On Thursday at noon the Lady Mustangs go against Aquinas. The same day at 3 p.m. the team is scheduled to play Orange Vista. Finally, on December 28, the girls have a TBA game.
Meanwhile, the boys will face Edgewood at noon on Wednesday followed by Bethel Christian at 3 p.m. later the same day. On Thursday, the boys will go against Woodcrest Christian at 4:30. The boys also have a TBA game on Friday.
Photo courtesy Lady Mustangs Basketball
Published December 24, 2018 Print