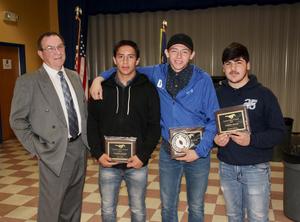 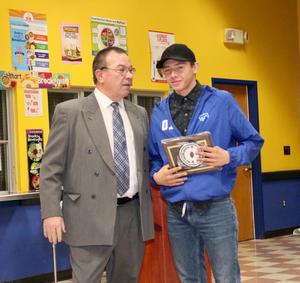 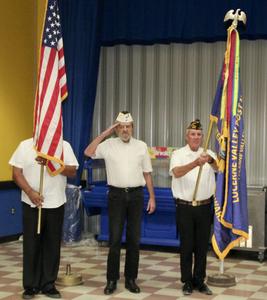 Coach Odum commended his players for the effort, especially in light of the tough competition of the Agape League.
By Peter Day
First-team all Agape League football player Isaiah Hernandez was one of several Lucerne Valley players to receive “Coach’s Awards” at the annual Mustang football awards banquet on Thursday, November 15.
A threat on both sides of the ball as the Mustang’s quarterback and linebacker when on defense, team captain Hernandez was presented the award by Coach Doug Odum. Hernandez, a multi-sport student athlete, took over at the quarterback after senior David Cummings sustained an injury. Over eight games, the junior threw for 705 yards and ran for 692, the most rushing yards for the team. He also had 58 total tackles on defense.
Senior Jesse Perez, a quick-moving running back and linebacker, was given a coach’s award for his leadership. Perez led the team with the most all-purpose yards — rushing, receiving and kick-off returns — 1,052 yards.
Sophomore Thomas Salbino received the “Coach’s Award” for outstanding play. Salbino plays the wide-receiver, linebacker and kicker positions. He also had the most receiving yards of any Mustang with 278.
The Salbinos have been a Mustang mainstay for several years. Older brother Joseph Salbino, who graduated from the high school last June, was a former Lucerne Valley multi-sport athlete, former Lucerne Valley FFA member and top student. Thomas Salbino’s other older brother, Michael Salbino — who was playing soccer at the time of the awards program — also received a coach’s award for his accomplishments on the gridiron. He is a wide-receiver and linebacker who caught 17 passes for 226 yards and led the team in total tackles with 84.

Freshman lineman Lukas King, who stands 6’3”, received the event’s first award of the event, which was held in the Lucerne Valley Middle High School cafeteria, for his willingness to learn and follow directions. The award given King, who was unavailable due to another sports event commitment, was picked up by a cousin.

REFLECTING ON THE 2018 SEASON

Just like a book can’t be judged by its cover, the 2018 Lucerne Valley Mustang football team shouldn’t be sized up solely by its 1-8 season record. That was head Coach Odum’s message during the awards banquet. Not only was 2018 a rebuilding year, but the regional competition is top-notch.
The California Interscholastic Federation’s Southern Section, which includes much of Southern California, is the most competitive area of high school sports in the nation, Odum said. It includes nearly 600 public and private schools. From it, thousands of athletes every year go on to compete at the college level, and some go on to play professionally. “The Southern Section is where it’s at,” he said. “The competition you find here is better than anywhere else.”
The high level of competition is increasingly evident in the eight-man Football arena. Nearly 100 schools now play eight man football and a large number are charter or private schools that have the ability to recruit the best players in the region. As a small public school, Lucerne Valley High School doesn’t have that luxury, he said, and relies on student-athletes from the immediate surround neighborhoods.
Moreover, the talent in eight-man Football is excellent. In fact, Heisman trophy winner Rashaan Salaam played eight-man football in high school before playing college ball at the University of Colorado. “Eight-man is just a smaller field and fewer guys, but it takes just as much skill and courage,” Coach Odum said.
The pool of talent is especially evident in the Agape League. Several Agape League teams are still in contention in the C.I.F. playoffs including Hesperia Christian, which is ranked 11th in the state. Lucerne Valley’s toughness was clear during its final game of the season against the Patriots. (Odum likened the Mustang’s daunting challenge to the Battle of Himera, which occurred in 480 BC between Greek forces and the Carthaginians.)
“We went toe-to-toe with the best team around,” Odum said. “We ran out of gas. We played injured, but we never gave up. We gave them a good game, and I’m proud of us.”
Several of Lucerne Valley’s best players are underclassmen who will be coming back and helping to build the Mustang football program. Odum is also hoping for greater community involvement, which plays a role in a team’s success.
“We’ve got to work harder,” the coach said. “Building a program doesn’t just build over night.”
The 2018 Varsity Football roster: Jesse Perez, Isaiah Hernandez, David Cummings, Andres Velasquez, Tyze Walker, José Alba, Thomas Salbino, Diego Salas, Alex Ramos, Michael Salbino, Jeremy Smith, Brody Evans, Lukas King, and J.T. Mills.
Also attending Thursday’s awards banquet was Middle High School Principal Nate Lambdin and district Superintendent Peter Livingston. Football parents provided a buffet of taquitos, meatballs, sandwiches and more. Veterans Herald Keesee, Mike Brown and Manuel Rubio, Jr. from VFW Post 5551 and American Legion Post 879 served as color guard for the event and led the Pledge of Allegiance.
Peter Day is a social media advisor for the Lucerne Valley Unified School District.
TOP PHOTO: Head Coach Doug Odum, left, is joined by “Coach’s Award Winners” Jesse Perez, Isaiah Hernandez, and Thomas Salbino. (Winners Michael Salbino and Lukas King were unavailable). Photo by Peter Day
MIDDLE PHOTO: Coach Odum presents a Coach's Award to quarterback Isaiah Hernandez. Photo by Peter Day
BOTTOM PHOTO: Veterans from VFW Post 5551 and American Legion Post 879 served as color guard for the event and led the Pledge of Allegiance. Pictured from left, are Manuel Rubio, Jr., Mike Brown and Herald Keesee. Photo by Peter Day
Published November 19, 2018 Print