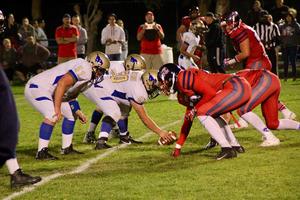 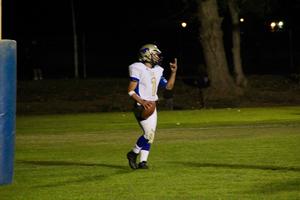 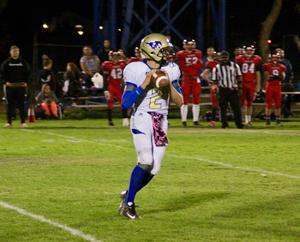 Jesse Perez has 288 all-purpose yards while Isaiah Hernandez has 289 total yards against Hesperia Christian.
HESPERIA — Despite the lopsided 70-20 losing score, several Lucerne Valley football players produced notable statistics as the Mustangs showed their spirit against a larger, talented Hesperia Christian team on Friday.
The Mustangs’ drive and determination was apparent from the onset of Friday’s game. Lucerne Valley scored 14 points in the first quarter and six in the second, but the team trailed the high-producing Patriots 40-20 at halftime. Hesperia Christian scored 30 more points in the second half.
Isaiah Hernandez, a junior, competed 12 of 22 attempts for 190 yards and a .545 completion percentage. He had a 15.8 yard average for two touchdowns. But Hernandez also was effective on the run, carrying seven times for 49 yards and a 7.0 average. He had 289 total yards.
The other offensive star for Lucerne Valley was senior Jesse Perez. He carried the ball 12 times for 99 yards and a 8.3 average. He also caught five passes for 101 yards and a whopping 20.2 average and one touchdown. He had 138 yards in kickoff returns.
The Salbinos also were key receivers. Thomas, a sophomore, caught three passes for 43 yards with one touchdown. Junior Michael Salbino also caught three for 41 yards. Brody evens caught one pass for a five yard gain.
Michael Salbino was virtually everywhere on the defensive side and led the team with 11 tackles. Offensive standouts Perez and Hernandez excelled on defense with each getting six tackles. Senior Jeremy Smith had six tackles, Thomas Salbino got five tackles, and A. Velasquez, Brody Evans and freshman Lukas King each had three tackles.
Friday’s game was the final competition of the 2018, which saw the Mustangs going 1-8. The lone win was a 22-8 victory over California Lutheran at home on Oct. 6.
Published October 29, 2018 Print