No refs, no problem for Lucerne Valley 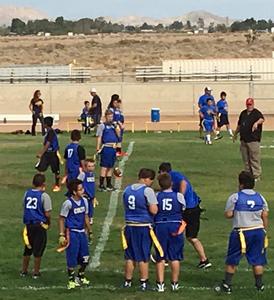 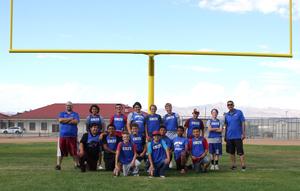 School district officials fill in at referee positions at Middle School’s first home flag football game.
LUCERNE VALLEY, Calif — After several weeks on the road, the Lucerne Valley Middle School flag football team was eager for its first, and only, home game of the 2018 season.
The Lucerne Valley Colts — their high school counterpart are known as the Mustangs — were going up against the Apple Valley Christian Warriors.
“The team was excited and ready to demonstrate their plays and skills they have been working on all season,” said the Colts’ head coach, Jacob Rodriguez.
Monday’s afternoon game originally was set for several weeks ago, but due to scheduling conflicts it had to be rescheduled. Unfortunately, league referees were unable to be there, but nothing would stop Lucerne Valley Middle School from holding its first home game.
Just minutes prior to game time as more than 100 people entered the stadium, Superintendent Peter Livingston called a huddle and orchestrated one of the greatest plays of the day, perhaps the season. The superintendent sent Assist. Superintendent/Principal Burt Umstead onto the field as the head official, and Middle High School Principal Lambdin became the line judge. While neither is a stranger to sports, Mr. Lambdin brings some serious experience in the athletic realm. Besides being a standout baseball player in both high school and college, he has served as head coach of both the Victor Valley College and Barstow College baseball teams.
But even more dedicated staff members from Lucerne Valley’s school community were eager and ready to serve. Mr. Livingston scurried up to the press box to announce the game and run the scoreboard while Chief Business Official Doug Beaton handled the down marker.
“We all had a blast helping make the afternoon great for the kids, their parents and the fans,” Mr. Lambdin said.
The game demonstrated to the players, school staff and community that a can-do spirit helps to overcome obstacles.
“To see so much community spirit and district support was truly uplifting for the players as they persevered through the game and went on to score multiple touchdowns,” Coach Rodriguez said.
Despite the home field advantage and familiar faces at the referee positions, the Lucerne Valley Colts came up short, losing to a tough Apple Valley Christian team, 26-12.
“Even though we lost, the Lucerne Valley Middle School Colts played a terrific game and never gave up. They made me proud to be their coach.”
The following are members of the 2018 Colts Flag Football team:
Irish Beaver, Thomas Grandjean, Jesse Gutierrez, Vincent Herrera, Evan Herriman, Eein Hite, Kimberly Luna, Allen McCoy, Robert Palmer, Gunnar Parker, Andre Rhodes-Ortloff, Cameron Robinson, Riley Rodriguez, Angel Sierra, Oliver Sierra, Derrick Tyler and Steve Villanueva.
Published October 2, 2018 Print