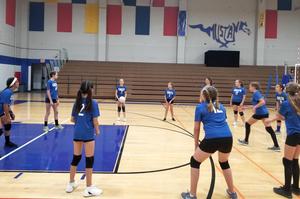 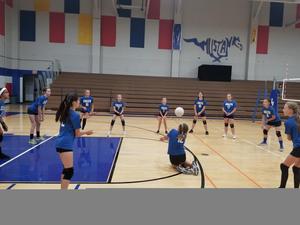 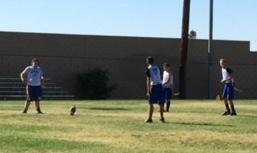 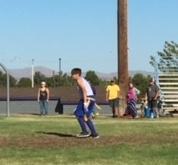 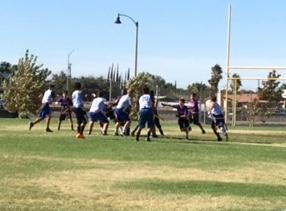 Middle School flag football squad shuts out Victor Valley Christian, 24-0; volleyball team led by Sarah Smith is winning games.
The Lucerne Valley Middle School Colts football team came out charging and never stopped, defeating Victor Valley Christian 24-0 on Monday in Victorville.
The team, led by head coach Jacob Rodriguez and assistant coach Tracy Quillen, hopes to build on their success in the final two games. The Colts face Apple Valley Christian at home on October 1, and the season concludes on the road with Lucerne Valley playing Norton Academy on October 2.
Meanwhile indoors the middle school volleyball team is making inroads.
“They are doing very well,” said Middle High School head coach Kelly Papiernik.  “They have won a couple of games and hope to win more.”
Sarah Smith, a former volleyball standout who graduated from Lucerne Valley High School this June, is leading the Colt volleyball team.
“Sarah is doing amazing,” Papiernik said. “She has them doing drills to improve their passing skills and conditioning to get them into shape.  Their serving is already improving, a couple of girls can serve over hand.  Watching these girls practice really encourages me about the future of our high school teams.”
And that bodes well for Lucerne Valley’s future teams.
“We will only get better from here,” she said. “We have some talent and the fact that we are tapping into that talent so early will make us a power-house once again.”
Lucerne Valley Middle High athletic director Brandon Barkley sees the middle school sports as an opportunity to build a base from which the entire sports program can grow.
“I see this in the long run as helping out the high school sports, and these younger athletes are able to get some fundamental work in at a lower level,” Barkley said.  “I am extremely happy to have middle school sports back at Lucerne Valley and happy to have some great coaches like Jacob Rodriguez and Sarah Smith.”
The success also shows in the numbers who turnout to participate.
“We have great involvement with the students with about 16 players on the flag football team and almost 20 players on the volleyball team!”
Published September 25, 2018 Print