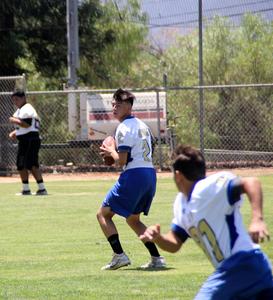 Quarterback Isaiah Hernandez led the team during three games in Wildomar.
Many members of Lucerne Valley High School football team participated in an all-day passing tournament on Friday at Cornerstone Christian School in Wildomar.
The tournament emphasized passing and receiving to help develop fundamentals for the positions of quarterback, receiver, running back, tight-end, defensive back and linebacker. There is no tackling or blocking, however. Teams played three games with a tournament in the afternoon.
Led by new coach, Doug Odum, the Mustangs faced three teams throughout day. They lost the first game to the California School for the Deaf - Riverside, were victorious over Blair of Pasadena and played tough against the host team, Cornerstone Christian School, losing by a matter of inches.
Isaiah Hernandez, a junior, will lead the Mustangs at quarterback this season, and had an opportunity to test his skills during the tournament. Senior running back/safety David Cummings had numerous carries. Jose Alba, one of the fastest track sprinters in the league, went head-to-head against other speedsters as a receiver. Running backs Hector Avelar, Thomas Salbino and several others saw action last week.
The Lucerne Valley varsity football team has a home non-conference game against Windward (Los Angeles) on Friday, August 24. The game starts at 7.
Additional photos of the recent Passing League Tournament can be viewed on the District's Facebook page at https://www.facebook.com/LucerneValleyUSD/
Published July 24, 2018 Print