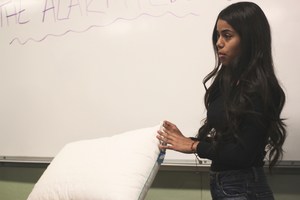 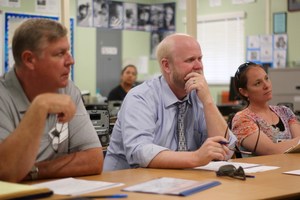 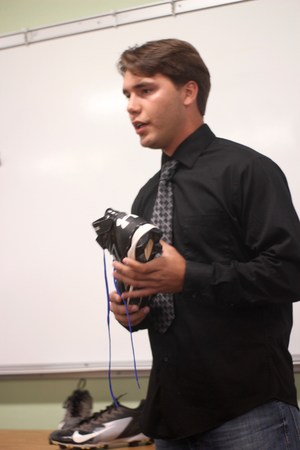 Students in Mrs. Lazenby’s class pitch business ideas in ‘Shark Tank’ show; Supt. Peter Livingston, school board members Jim Harvey and Jessica Risler, and local financial adviser Martin Brander act as “sharks.”
Students in Mrs. Cindy Lazenby’s high school economics class faced a daunting assignment earlier this week: Pitch business ideas to a panel of local experts who posed as investors.
Based on the popular TV show “Shark Tank,” the would-be investors — all ready to plop down several hundred thousand dollars — included school district Supt. Peter Livingston, school board President Jim Harvey, new school board member Jessica Risler and local financial investment adviser Martin Brander. The “Shark Tank” presentations were given over two days, Monday and Tuesday.
Each presentation team of two to three students had 10 minutes to impress the investors and then answer questions, all of which were thoughtful, insightful and at times pointed. During Tuesday’s class, a student team presented a clever project pillow/alarm clock combination. The hypothetical product, called the “Alarmillow,” sells for $39.95 and comes with a downloadable app. The team was seeking $200,000 from an investor.
“We want to expand and lower the price of our product,” said a presenter.
Then “shark” Mr. Brander began asking questions…. He asked about gross sales numbers, employee pay, online sales, shareholder percentages and more. He said he would give $200,000 but wanted 30% ownership of the company. Then Mr. Livingston bid $1 million but wanted 49% company ownership. Ms. Risler, who in real life helps run the Kiwi Shoes company, discussed the possibility of contributing money to the business but ultimately dropped out. “I like your concept,” she said.
The Alarmillow team ended up going with Mr. Livingston’s proposal, which at the end included 48.5% “ownership” for the bidder.
Other products pitched on Tuesday included an all natural lotion with a variety of size and price options, a washable exercise belt with state-of-the-art components, and a product that wowed the investors — a shoe with removable bottoms called the “Versa Cleat.”
The investors asked tough questions for all product presenters. “You’re intending on this business to grow. How?” asked Ms. Risler. Mr. Brander asked, “In a sea of product how do you distinguish yours?”
The investors said the “Versa Cleat” was the most marketable product and said that Garrett Hoskins, whose team presented on Monday, was the best negotiator. A unique product created by Diego Orozco and Marlen Cortez that resulted in a T-shirt with replaceable fronts so college students wouldn't have to wash clothes as often was considered especially interesting and unusual. Investors scored each team on a number of points, which were submitted to Mrs. Lazenby following the event.
Following the “Shark Tank” project, Mrs. Lazenby handed out the students’ final economics project of the school year: a company research project in which students must provide a detailed report on a company’s history, organizational structure products and services.
------
Additional photos of Mrs. Lazenby's "Shark Tank" project are on the Lucerne Valley USD Facebook page at https://www.facebook.com/LucerneValleyUSD/.
Published May 9, 2018 Print