LVMHS Kicks Off Holiday Season with ‘A Winter Celebration’ 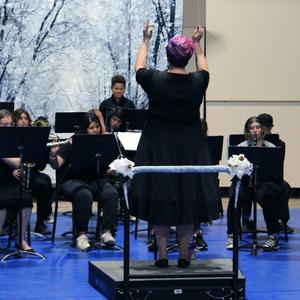 Concert on December 2nd showcases several school bands and orchestras.
The Lucerne Valley Middle/High School Music Department presented “A Winter Celebration” concert on December 2 in the Sgt. Brian Walker Memorial Gymnasium. Music Director Amy James-Forrette, who teaches music at all Lucerne Valley USD campuses, conducted the musicians and emceed the event.
The celebration began with the String Orchestra performing Larry Clark’s “Oath of Honor” followed by “Impulse” by Brian Balmages. “Oath of Honor” is designed to invoke a sense of pride. It has a celebratory and ceremonial nature to it, according to the conductor. “Impulse” is named for the composer’s impulse to write it. “The piece is driving and maintains high intensity throughout.” The String Orchestra consists of violinists Meilani Nguyen, Isela Barrita and Syler Frazier, viola players Maria Lepe Arias and Lee Tyler, and cello players Rylee Giles and Leon Willoughby. Amy James conducted the String Orchestra. Photo by Ava Walkovitz
The Beginning Band played Brian Balmages’ “Creatures In The Attic.” Creatures in the Attic- This piece of music was inspired by the imagination of the composer’s 4-year-old son, Ms. James said. The composer also wrote a poem to accompany the piece:
“I have a little secret
That I’ll no longer keep,
Explaining lots of little sounds
When everyone’s asleep.
Is that wind I hear outside?
Or knocking at the door?
They may just be my fuzzy friends
Making noise between each snore.
They start off very quietly
When all the lights go out;
They check to make sure no one’s watching,
Then start to dance about.
Pretty soon they’re going crazy!
A midnight celebration!
I’m glad they’re having so much fun,
But where’s my invitation?
As soon as dawn approaches,
They start to settle down;
Putting all their toys away,
They cease to make a sound.
And then we wake up wondering:
Was it creaking or TV static?
Others may wonder but now you know;
It’s just the creatures in the attic.”
The Beginning Band consists of Monserrat Calderon on flute, and Marisol Alcazar and Isabella McCuistion on clarinet; Liam Barcelos, Aiden Sosa and Judith Orozco on alto saxophone; Valerie Ortega, Julian Casian Castellon, Alizah Tejada, trumpet; Aubrey Stiles on trombone;  Kennyth Smith and Jennifer Fernandez-Madriz, percussion; and Emma Rogers, euphonium. The Beginning Band made an impression during the event. Photo by Ava Walkovitz
The Advanced Band performed two songs by Randall D Standridge, “The Lake of Sorrows” and “Dark Ride.” The first piece of music is inspired by a story from the imagination of the composer:
“Once, there was a goddess who roamed the forests that border the Darklands. One day, a mortal man wandered into her domain, and she fell in love with him on sight. For a time, they lived happily. As the years passed, however, she remained beautiful and young, but he aged, as all mortals do. Upon his death, the goddess was so overcome with grief that her tears formed a lake. To this day, all who foolishly wander too close to the Lake of Sorrows are drawn into its dark waters… but they do not die. They stand on the lake bed, looking upwards and weeping, as the eternal storms thunder and roil overhead.”
“Dark Ride (the second piece) is intended to evoke the experience one might feel on a moon lit night, riding through a darkened forest. The shadows stretch out across the ground, the wind howls, and owls may be heard hooting in the distance. Suddenly, a twig snaps behind you. You race into the darkness, fleeing from whatever made the sound.”
The Advanced Band performers are Alina Tucker and Cinthia Surber, flute; Eileensurii Davalos, Dominic Briceno, clarinet; Bradley Bernal on alto saxophone; and Kevin Angeles, trumpet.
The Combined Band concluded the event with “Merry Christmas to All” by Sandy Feldstein and John O’Reilly. This piece combines themes from Jingle Bells and Jolly Old St. Nicholas to create a festive tune.