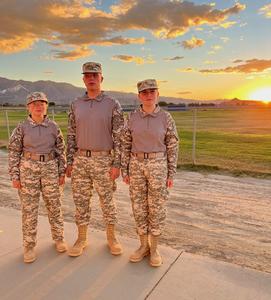 Sgt. Jacob Klinger, an LVHS graduate, patterns Rangers in Training program after a proven program — the U.S. Army.
By Peter Day
LVUSD Social Media
There’s a lot more to military service than what meets the eye.
Loyalty, duty, respect, selfless service, honor, personal courage and integrity and other Army values are qualities that Lucerne Valley students are now learning. That and much more is what Sgt. Jacob Klinger is teaching his Lucerne Valley Rangers In Training cadets on a daily basis.
During a recent mixed 7th and 8th grade class, Sgt. Klinger, who also serves as an assistant football coach, taught Army values, the Soldier’s Creed, and led a discussion of the poem, “I Am A Soldier.” He also discussed director Robert Zemeckis’ Netflix military series “Medal of Honor.”
But the sergeant brings much more than theory and literature to his class. He shares his personal experience. A veteran of the Iraq War in the early 2000s, he says he owes nearly everything to being in the military. “One thing about the military, you learn about love,” Sgt. Klinger said while talking about the importance of being a team member.
Lucerne Valley Ranger cadets are currently in the midst of a “basic training” period, which will last until November 10th. First Sgt. Klinger developed a baseline using the Army Physical Fitness Test (APFT).  No one passed. But now, weeks later, Sgt. Klinger has 10 of 13 high school aged students and 16 of the 28 middle school aged students passing one or more segments.
Student Ashlynn McTiernan, who also enjoys being on the Middle School volleyball team and taking Mr. Madrid’s history class, says she is learning life lessons in her Rangers class with Sgt. Klinger.
“I try living by how we are taught,” Ashlyn said. “I try being nice to those I don’t like. It goes hand in hand with this class.”

A former staff sergeant in the U.S. Army, Sgt. Klinger served as a member of Special Forces group, airborne certified. He was the recipient of three army accommodation medals and other accommodations: a Combat Infantryman Badge, two Meritorious Service Awards, an Outstanding Leadership in Combat and a Purple Heart, after he was wounded in combat.
A graduate of Lucerne Valley High School, Sgt. Klinger lived in the Lucerne Valley for 17 years. He started college at Oregon State University, aiming for playing football at the Division 1 level, but due to admittedly poor decisions, he was forced to repeat his first year — or leave.
“Like most 18-year-olds I knew best, so I left,” he said. Without a job, he enlisted in the U.S. Army. That was in 2006. He served in the infantry in Iraq and adopted the belief: “If you’re going to do anything, do it 100 percent.”
Sgt. Klinger shared his story during the August meeting of the school district’s Board of Trustees. He shared that his father had passed away of cancer when he was a 14-year-old freshman at LVHS. “I was left without a dad.”
But one thing he remembers his father telling him before he died was to set goals. The first goals you set should be attainable, his father told him. “At 14 I didn’t know what it meant, but now I know it’s a win in my column.”
His father said after you attain the first simple goal make three more goals. “These goals you will make impossible,” he remembers his father saying, “and when you achieve these goals you are now ready to support a family, yourself and a lifestyle.”
Sgt. Klinger’s first goal was to make the varsity football, which he did that in just his freshman year. His next goal was to support himself financially. He started that goal by working part-time Chuck Bell’s farm all through high school. “The last goal was the hardest for me; it was to graduate with honors from Lucerne.” But he accomplished that goal and was No. 12 in his graduating class.
When he graduated high school and joined the Army the following year, he was determined to be the best soldier ever. “I was going to change the world. That goal is unbelievably hard. There are so many things in your way. However, I did achieve that goal.”
That became apparent gradually as he dedicated himself to his mission.  Early on, his first sergeant gave advice that would stay with him him to this day.
“All you have to do to be successful is to do 1 percent better tomorrow. At the end of the year you’ll be operating at 365 percent better than average. I live by that today. This single piece of advice has pushed me to become who I am today.”

His road map for his students to do something great: “If my kids do half of one percent every day, they will achieve greatness.”
During his service in Iraq, Sgt. Klinger commanded a squad of 14 men. All of them survived and started their own families and businesses. He is still in touch with them. “They are living lives they are proud of. That to me is changing the world.”
Sgt. Klinger wants to pass along that success to his middle high school students. “If I can do it with 14 grown men I hope to do it with the 50 kids I have.”
His second main goal was to marry his best friend and have children.
“It took me a long time find her. I ended up marrying the salutatorian of my high school. I didn’t meet her until I was 24. It took a war, and 7,563 miles of separation, but we found each other.”
The second part of that goal was to have kids. He and his wife, LVES teacher Stephanie Brander Klinger, have two children, ages 10, 8. “They’re competent in school. They’re strong. They have a high level of empathy.”
Finally, his final major life goal that he set when he was a young adult was to become a teacher. That journey wasn’t easy or quick. It took a long time get his degree. Then during COVID he was a school janitor. But he kept the faith.
Now as a teacher, Sgt. Klinger has a new set of goals: 1) fill his students with a passion for learning, 2) create a cadet program centered around the military that students can be proud of, and 3)  “I’m going to challenge myself to instill the values in every student I have.”
“That man that’s standing here today is 100 percent the product of the Army,” he told the school board. “Without the Army I don’t know where I’d be. It took an 18-year-old boy that was lost with no way out and turned him into a professional, something I can be proud of.”
Today, as Sgt. Klinger’s first fall of teaching moves forward he can say that many of his  students are on a similar journey.
“They are not only retaining most of the information I provide, but they are eager to learn more.” A cadet in Sgt. Kilinger's 7/8 combo class concentrates on the day's lesson. Photo by Peter Day Sgt. Jacob Klinger talks to a group of students after a recent middle school class. Photo by Peter Day