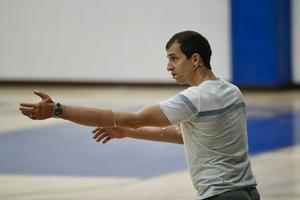 If you’re truly thirsty for something, you will overcome and attain your goal, double amputee tells Lucerne Valley Middle High School students.
By Peter Day
LVUSD Social Media
In one of the most riveting inspirational speeches in memory, double amputee Brad Hurtig shared his story of losing both hands in a manufacturing accident and eventually becoming one of the best high school football players in the state of Ohio.
Hurtig, who wears prosthetics on both arms, told Lucerne Valley Middle High School students during an assembly on Thursday, December 16th how his life changed in an instant after he and a friend accepted a long-hour extra work opportunity in a sheet metal facility.
He began his assembly talk by having students experience his situation firsthand. He had volunteer students come to the front and pick up water bottles — without using their hands. A few succeeded, but most had a difficult time with the challenge, which he faced in real life after losing his limbs.
A twin, Hurtig said his father was a “Mr. Fix-it type of guy.” As a result, he too loved working with his hands. Before the accident, he was an outstanding high school athlete.

One night after his sophomore year, his life changed. He had accepted an extra job, which meant he and a friend would have to be up for 24 hours straight. The two were tasked with operating a power press pushing 500 tons of pressure to bend sheet metal.
At 2 o’clock in the morning while his friend was turned in the other direction, Hurtig put his hand under the press to readjust a piece of sheet metal. The massive machine had a feature to prevent accidents; however, the laser detection device wasn’t aligned properly. Then, without knowing Hurtig’s hand was there, the friend pushed the button that sent the press down onto both of Hurtig’s forearms. Instantly, both hands and part of each forearm were crushed and severed.
Hurtig wasn’t sure what happened until he heard someone else screaming in shock. “When I looked down, it was not good.”
As he was taken to the hospital in the ambulance — and then transferred via helicopter to a larger medical facility — he started to think about how different his life would be from then on. He stayed in the hospital for 11 days.
“How often do you use your hands?” he asked the audience. “I didn’t know how to process this.”
He felt sorry for himself. He felt helpless and hopeless. But, he reminded the audience,  “There is always hope. You can find a way.” He added that if anyone faces an obstacle that seems too big to overcome to talk to a counselor, or someone. “Find a way to talk to somebody.”

‘YOU WILL FIND A WAY’

His junior year of high school following the tragic accident he went back to be with his football team. His options seemed slim to none. One day his water bottle fell on the ground. Expecting his coach to pick up the bottle, Hurtig was surprised — and initially angry — at his coach’s reaction.
“He (the coach) said something that changed my life: ‘If you’re thirsty enough you will find a way.’”
And sure enough Hurtig found a way to pick up the bottle and get a much welcome drink of water. “That experience was this paradigm shift for me. What you and I focus on in life will determine your future.”
As people do with their cellphones, every night Hurtig plugs his high-tech prosthetic arms into the wall electric socket to charge them.
Although there are countless negatives to not having hands, there are some unexpected positives about prosthetic arms: He can take hot things out of the oven — as long as they aren’t 400 degrees or hotter, which can melt the prosthetics — without hurting his hands. He can also pick up something in the snow without getting cold.
Hurtig was right handed, but because his right forearm was the most injured of the two he had to become left-handed.
“I had to have a willingness to adapt to do things differently. Life is not easy. It’s not fair, but you have to stick with it. When obstacles seem insurmountable, you knock that goal down into smaller steps.”

The talented athlete was working hard to stay in shape despite missing his hands and missed being on the field with his team during games. So the coach gave him an opportunity by finding a spot for him as a kicker.
“I wanted to get back to Friday night lights,” he said.
His first game back he got a massive standing ovation. As he readied for the snap from center, the crowd hushed into silence. He went for the kick — and missed.
Every day the following week he spent two hours working on his kicking technique. The next game he came up to kick again, and again the crowd gave him a huge ovation followed by silence as he went to kick. Once again he missed kicking the point after touchdown.
So he went back to working on his technique two hours a day for the next week. But when he went to kick the next game, the ovation wasn’t as loud this time. “Third time’s a charge, right?” But once again he missed the kick. “I really felt defeated.”
Finally, on the fourth game as a kicker, he made it through the uprights.
The decision was made to put him in the linebacker position. With hard work and lots of resilience and determination he eventually made First-Team All-Ohio honors.
Hurtig wants to help people get over obstacles, big and small. “The reality is, the truth is we all have setbacks, but how you deal with them will define your life. I want to encourage you to not give up. If you’re truly thirsty enough you’ll push yourself harder than you ever imagined. If you are willing to have the right mindset, if you’re thirsty enough you will find a way.”
After his speech, he conducted a question and answer period, which had a large number of students raising their hands and asking questions.
What sports do you do now? He said he plays on a church softball league. How long ago did the accident occur, a student asked? It was 19 years ago, he answer. Students asked a number of additional questions during the assembly.
Hurtig has been featured on ESPN, The New York Times and was featured as a TEDx speaker. He also wrote a book, “Find A Way: How a Water Bottle Took Me from Amputee to All-State.” He now travels the country sharing his message of “Find A Way.”
For more information on the Brad Hurtig story, follow him on Facebook, Twitter and Instagram @BradHurtig or visit https://www.bradhurtig.com/
Published December 22, 2021 Print