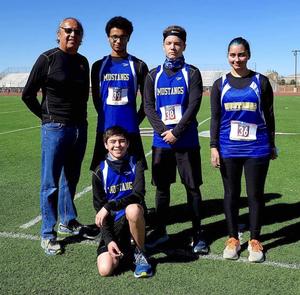 COVID-19 guidelines implemented by Cross Valley League officials; 7 teams compete over three staggered heats.
By LVUSD Social Media
Four Lucerne Valley High School cross country runners competed in Tuesday’s Cross Valley League Meet #1 at Riverside Prep.
Due to COVID-19 restrictions, the Mustangs competed along with two other teams in heat one of the three heat event. Lucerne Valley ran with teams from Cobalt Institute of Math and Science and University Prep. Four other teams, including Big Bear High School, ran in separate races with two teams competing apiece.
“The guidelines with COVID restrictions were good,” said Mustang Coach Guillermo Betancourt. “Runners had water at the finish, they had to keep their masks on when not running, and they had a designated area on the field to warm up separately from the other teams. It was strange to see only two other teams there.”
Teams from the other races arrived after the Lucerne Valley squad had left for home.
Junior David Daniels, who was third in his heat, got close to a PR with a time of 21:33. Robert Cook came in 5th with 22:30, Dylnn Cagle had a PR of 25:32 and Blaine Monet Willoughby finished in 39:41.
“The team looks forward to improving next week at Silver Valley,” the coach said. “Robert definitely be working hard this week to set a PR next week. David is looking to get into the 20s (under 21 minutes) as well.”
From left: Coach Betancourt, David Daniels, Robert Cook, Blaine Monet Willoughby. Dylnn Cagle is in the front row, kneeling.
Photo credit: Jessica La Voise
Published March 4, 2021 Print