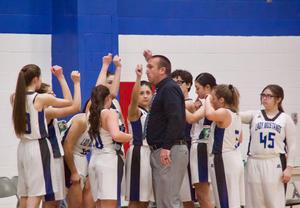 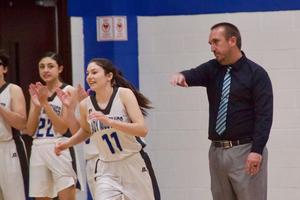 Lucerne Valley takes on Coastal Christian at home Saturday at 7 p.m.
Perhaps influenced by the Mustang boys recent final-game victory, the Lady Mustangs stuck to their opponents like glue, defeating a taller Packinghouse Christian Academy team 33-11 for its first playoff game of the post season at home on Thursday, February 13.
“Our defense was the key,” said Coach Brandon Barkley. “They (Packinghouse) only scored four baskets total. Our defense was swarming and we rotated amazingly!”
Not only did Lady Mustangs star Krystian Otwell play perhaps her toughest defense of the season, but she shined on the offense end of the court.
“Krystian scored 17 of the 33 points, which is amazing,” Barkley said.  “No one else scored more than four points.”
Lucerne Valley plays Coastal Christian (Pismo Beach) at home this Saturday (Feb. 15) at 7 p.m. The Conquerers are the No. 5 seed who beat Gladstone (Covina) 36-31 to advance.
Published February 14, 2020 Print