Lady Mustangs Give Their All But Come Up Short 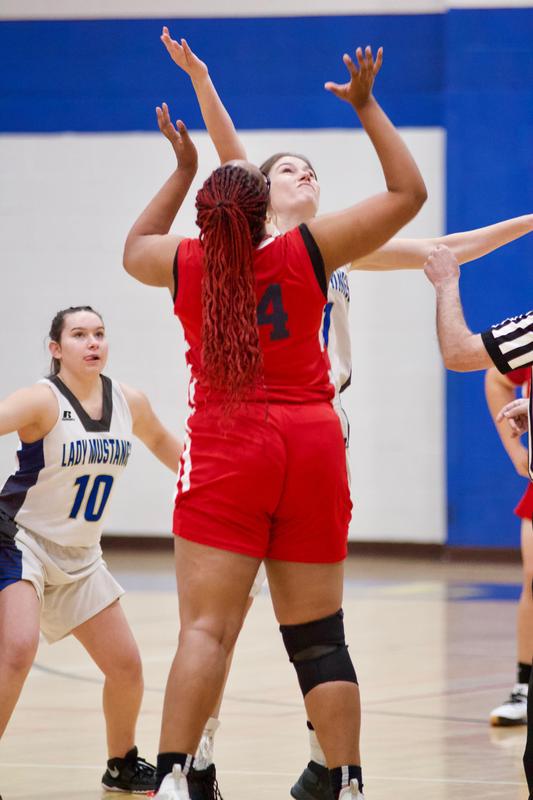 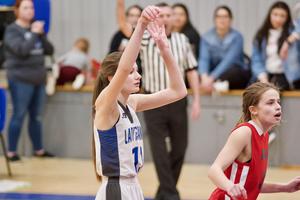 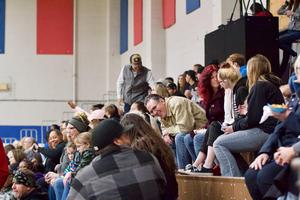 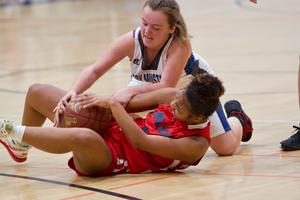 Spirited home crowd gives support as Lucerne Valley Girls Basketball takes on ACE for league crown and see boys team win a thriller.
By LVUSD Social Media
Facing the best player and team in the Agape League with one of most dominant centers around, the Lady Mustangs battled their hearts out to, hopefully, secure their first league championship in several years. Ultimately, however, the Lucerne Valley Girls Basketball team fell to the Academy of Careers & Exploration on Friday, January 17 by a score of 51-34.
“It sure was an exciting game,” said LVHS Coach Brandon Barkley.
Showing their game faces, the Lady Mustangs came out hard and fast. Krystian Otwell got a bucket within the first 30 seconds, and the game soon was 12-10, with the Eagles leading, after the first quarter. Lady Mustang guard Ruby Thompson, a junior, was all over the court, moving the ball and making defensive plays, and senior forward Brenda Almonte put her all into her play. She ended up going 7-for-11 and being the Lady Mustangs’ top scorer with 18 points. Almonte also had nine rebounds and four steals.
“Brenda had a great game,” Coach Barkley said. “She had her best shooting game of the season. I think as a senior she understood what was on the line that night. She gave it her all, and I am so proud of her!”
Typically the Lady Mustangs’ top scorer, senior Krystian Otwell had a hard time getting her offense going, shooting 3-for-15 for six points. But she had two steals and eight rebounds.
Ruby Thompson went 2-for-12 for five points and added three rebounds, five assists and three steals.
Otwell’s younger sister, Elissa Otwell, went 0-for-4, but got one point on a field goal and had five rebounds, three assists, two blocks and four steals.
Jenae Rankin, who in a previous game scored 10 points, went 1-for-1 for two points and one rebound. Tatum Fox had one assist but shot 0-for-5 for zero points. Andrea Garcia went 0-for-2.
Lucerne Valley’s low field goal percentage and high turnovers were the difference.
“We had too many turnovers (32) and shot horribly from the field (13-50),” the coach said. But the Lady Mustangs were up against one of rarest basketball talents in the High Desert — Aerin Wiggins, who scored 21 points.
“She is just an amazing talent we rarely see at our level.  She is the three-time Agape League MVP, Im sure soon to be 4th after this year.  I truly feel we did a pretty good job containing her in the half court set.  She had most of her points off fast breaks and our turnovers.”
When Lucerne Valley wasn’t trying to contain the outside shooting threat of the University of La Verne-bound Wiggins, they were going again dominant inside player, ACE’s Indigo Artiu.
“It didn't help that that big girl, Indigo Artiu, was there — she didn't play the last time we faced them — and when she wasn't in, we played even with ACE. Her and Aerin are definitely difference makers for that team.”
Despite not getting the win, the enthusiasm of the supporters who packed Sgt. Brian L. Walker Memorial Gymnasium made all the difference to Barkley and the players.
“I just want to say thank you to the community of Lucerne Valley for coming out and supporting us in our title quest,” Coach Barkley said.  “I know we came up a bit short, but the support and huge crowd truly was a blessing, and I know I can speak for the girls when I say, those type of crowds are the best to play in front of. My girls played their hearts out and came up short to a really good ACE team. We will continue to work hard to finish out the season with our last seven games before heading to the playoffs.”
But the fans were in for a treat as the previously 1-13 boys team won a thriller against ACE, 38-36, following the girls’ game.
Published January 20, 2020 Print