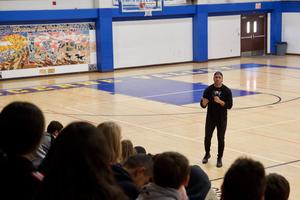 Caleb Campbell urges students to use their voices to help other teens who need support.
LUCERNE VALLEY, Calif. — On the surface, former NFL linebacker and U.S. Army Lieutenant Caleb Campbell may look like life has been easy and breezy. But as a teenager, he too struggled with self-worth issues, depression and the temptations facing many middle- and high-schoolers.
That, and more, is the story that Campbell, 35, shared during several “Teen Truth” assemblies on Wednesday, November 20 at Lucerne Valley Middle High School.
The athletic Texan wanted badly to play in the National Football League. “I had goals. I had dreams,” he said.
And so he put his dreams into action.
“Every day I was the first person to wake up and be in the gym before school even started, and I was the last person to leave school.”
Ironically, however, that made him feel more alone. He felt like he never belonged anywhere. He felt isolated. At 16, tired that no one seemed to accept him for who he was, he wrote his first suicide note.
“I didn’t want to be here anymore,” he remembered.
Luckily, a close family member intervened and talked him out of going through with it. But more suicidal thoughts would come, even with athletic successes in high school, college and beyond, and when he became a pro football player, the teetotaler turned to drugs and alcohol.
Today, he knows that other students battle similar emotions.
To bring that point home he played a video from footage taken by five teenagers given cameras to capture their high school lives. The video showed the difficult side of teenage life from peer pressure to bullying and students discussing their challenges.
Next, Campbell discussed the Columbine High School tragedy where two armed students — following months of planning — went on a deadly rampage in 1999. Twelve students and a teacher, along with the two shooters who took their own lives, died. While the root causes of the Columbine massacre and other school shootings are still being analyzed, Campbell believes creating a healthy school climate with students themselves playing a lead role can help prevent such tragedies.
Once Campbell was willing to take off his mask and begin talking to young people about their feelings things got a lot better. “I found my voice.” Moreover, “It’s OK to go through things. It’s OK to feel pain. It’s not your fault. That pain doesn’t make you less of a person.”
He encouraged the Lucerne Valley students to reach out to others, to be kind to others, to help make a difference.
“Teen Truth is what happens when you begin to recognize that maybe the anxiety you’re facing or the depression that you’re dealing with or maybe the panic attacks that you’re dealing with on a daily basis do not define your worth in life.”
Use your own voice, your own experience to make a difference, he said.
“Make a choice. Use your voice to make a difference in someone’s life.”
Campbell is regarded at the Teen Truth organization’s top teen mental health speaker. Besides school assembly speakers like Campbell, Teen Truth has many helpful videos. For more information on Teen Truth, visit www.teentruth.net.
Published November 27, 2019 Print