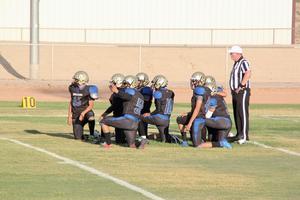 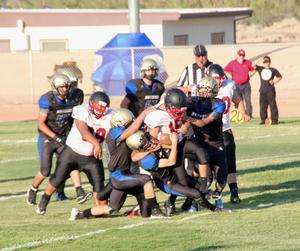 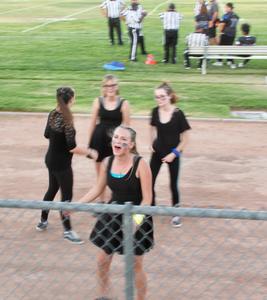 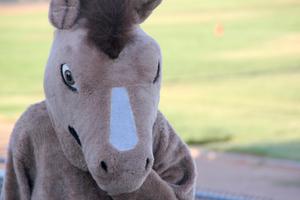 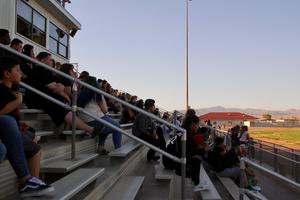 By Peter Day
It felt like a homecoming game: Alumni, family and staff members poured into the Lucerne Valley High School football stadium for one of the best attended opening football games in memory.
While attendees came on Friday, April 30 to see the Mustangs play a tough Noli Indian team, there was a lot more. Students were asked to wear black T-Shirts and receive a surprise. There was a surprise indeed as the football came out onto Ron Peavy Field wearing new uniforms: mostly black with blue and gold trim.
The new colors were accompanied with decidedly contemporary music — with a smattering of spirited classics — blasting over the stadium public address system. Over the course of the game, the crowd was treated to an Eminem song, AC/DC’s “Back In Black,” Guns and Roses “Welcome To The Jungle,” current popular rap songs and much more.
Lucerne Valley’s mascot, a Mustang, came to life and wandered the crowd. But there was more. The event welcomed the “Lucerne Valley Beats,” a small cheer squad that rallied the crowd several times during the game.
Despite the exciting new color and sounds, the Mustang football team couldn’t contain the more developed Noli Indian squad. Lucerne Valley had some good moments with tackles, catches, and runs and throws by new young quarterback Brian Miller, but Noli’s experience was the difference. The final score: Noli Indian, 48, Lucerne Valley, 0.
Lucerne Valley will travel to Palos Verdes to take on Chadwick next Saturday, September 7.
Peter Day currently is a social media advisor for the Lucerne Valley Unified School District.
Published August 31, 2019 Print