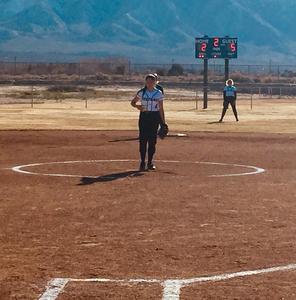 High School track and field, Middle School basketball teams start competition this week.
Friday, February 22 — On Friday the Lucerne Valley High School baseball and softball teams took on the Knights of Desert Christian in Lancaster. The boys baseball put together a good first three innings before eventually dropping the game to Desert Christian. Andres Velasquez threw three innings striking out three. The boys basketball team traveled to Joshua Springs on Saturday.
The Lady Mustangs Softball team also took on the Knights, competing with them through six inning but eventually falling to Desert Christian.  Raelean Carmona and Alyssa Grizzle each had two hits for the Mustangs and Freshman Andrea Garcia had another complete game for the Mustangs.  Softball also traveled to Joshua Springs on Saturday.
All sports events were canceled on Thursday due to snowy weather.

Tuesday, February 19 — On Tuesday the Mustang girls softball and boys baseball were in action as they both took on the Cougars from CIMS. The baseball team improved so much in the last week giving CIMS a competitive game but eventually lost 16-4. The Salbino brothers, Michael and Thomas, led the Mustangs both having two hits and a run scored.
The softball team played much better against CIMS this time, but they too fell to the Cougars.
Friday, February 15 — The Lucerne Valley Mustangs saw some action on Friday afternoon as both the baseball and softball teams took on Trona.
First up was the softball team. The girls played a great game, for most of the game, our Mustangs were within one run and kept it close. Eventually they did fall 13-6.  Andrea Garcia pitched all seven innings striking out eight batters, Kylie Douglas and Krystian Otwell each had two hits and 2 R.B.I.’s.
The Mustang baseball team also took on Trona and although they played much better did fall to the Tornadoes 17-3.  Jamar Jones led the Mustangs, going 2-for-3 with a run scored.
THIS WEEK: This week will see the start of the Track and Field season on Tuesday, February 26, and the Middle School basketball teams on Thursday, February 28.
Lucerne Valley Athletic Director Brandon Barkley provided information and statistics for this article.
------
PHOTO: Freshman Andrea Garcia pitched Tuesday's softball game against CIMS. Photo by Peter Day
Published February 25, 2019 Print